You are here: Home / Archives for Lego / Lego Ninjago

I do find though that there are so many Lego specific sets such as Lego Star wars, Lego Chima, Lego Pirates Of The Carribean and others, that you are best to collect the sets within one series. So, if you are going to collect the lego series then your children may be more inclined to play with one preferred series and the others may go by the way side.

Here’s the story on the Lego Ninjago 9450. The world of Ninjago is being threatened. The great devourer has been awakened and The legendary green ninja riding the 4-headed ultra dragon must defeat the evil adversary. Can he do it? Lord Garmadon must harness the power of the 4 golden weapons of Spinjitzu and attempt to destroy the mighty snake.

Let the battle begin and see if you are able to help Jay release the master, Sensei Wu, from the impenetrable snake prison. The outcome is in your hands and perhaps that of your friends as I am sure your play mates will want to take part.

What you get in the Lego Ninjago 9450

This set has everything you need to get this battle underway. 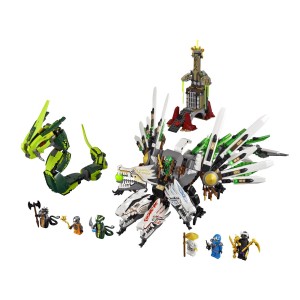 The great devourer has a flexible body and his mouth is big enough to fit a figurine during battle. The size of the Ultra Dragon is 50cm long x 35cm wide x 22cm tall (20″ x 14″ x 9″), so really a great size to play with easily.

Dragons are always a hit with children and role play is fantastic to keep the imagination active. Something that I believe can be lost through years of schooling so this is your opportunity to let them use their creativity at home. For some crazy play, try the Lego Space Shuttle meets Lego Ninjago The Ultra Dragon. Or, if you think that the Lego Ninjago 9450 is not for you then you can check out the Lego creator series that I know my kids love.

The Lego Ninjago 9450 has been highly rated by those who have purchased it to add to their Lego Ninjago collection. Get yours today and go play!